VR5: Is this where we start with Christian VR?

VR5: Is this where we start with Christian VR? 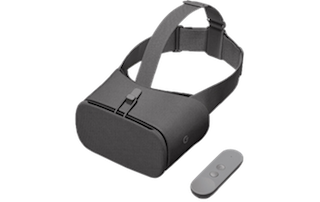 You’ll never guess where I just was.

I was scuba diving among dolphins and sharks, looking up at the hull of the ship from which I came, and then behind me as a friendly dolphin nuzzled up to my left side. Then, after looking around a bit at Machu Picchu, I decided next to visit the Taj Mahal. I spent a few minutes on a balcony looking up and down Constitution Avenue in D.C. at the huge crowds attending the March for Life, and finally floated for a while among the chunks of rock that constitute one of Saturn’s rings.

And all that without leaving my couch. Well, I did stand up once in a while so I could more easily turn to see what was behind me.

These were a few of the 360-degree “virtual reality” videos available from the New York Times using their NYTvr app on my iPhone, along with the “cardboard” viewer I received free a couple years ago as part of my online subscription.

The descriptor “Virtual Reality” is applied to a variety of technologies. At the low end are the old “virtual worlds” on the internet, where the user moved around by typing short commands (“Turn left” produces the revealing sentence, “You see a fireplace between two bookshelves”). These soon added images and got quite sophisticated and engrossing, as many who spent hours navigating puzzles in the world of “Myst” will testify. At the other extreme come the thoroughly immersive interactive VR experiences – what I would consider “true VR,” since the viewer finds herself entirely surrounded by a virtual environment in which she can move about, interact with objects, decide what to do, and control the experience.

Somewhere between these extremes are the 360-degree videos. These place the viewer in the middle of a virtual experience, such as those mentioned above, in which she can look right and left, up and down, turn and look behind – thereby strongly enhancing the impression of actually “being there.” But the viewer is limited simply to viewing; the experience is presented to her much like a movie, and the only control she has is her ability to look in various directions. As such, in my view, it falls short of “true VR.”

Still, this medium might be one of the best for us to explore, at least at this time, for gospel applications, for two reasons.

First, with 360-degree video, the creator remains in control of the story. That lends itself better to a presentation – something a gospel proclamation seems to require – while the VR aspect, though limited, still enhances the power of the experience.

And second, this medium is more accessible, both to the creator and the viewer. [For even greater accessibility, watch for the rapidly growing 180-degree video technology with cameras in the $400 range – more on that later.]

[Note: in the following exploration of 360 VR equipment, my mention of a particular product or website is not an endorsement – just directing you to places to look.]

The viewer needs only the characteristic “goggles” and earphones. These vary in price and quality. My “cardboard” viewer (see photo with March 6 post below) was free with a subscription. B&H sells the Google Daydream for $99 (pictured above). You might find a suitable model on sale at Target or Shopko for $20.

Once you have that equipment, use your phone to find 360-degree experiences at places like NYTvr and enjoy! There is a rapidly growing collection on YouTube. But don’t get dizzy!

And what about producers? Well, one would need a camera capable of recording 360-degree video, and computer software for editing it – unless you want to animate the entire experience, in which case you would not need the camera.

You can get a professional camera for around $80,000 – but that’s not “accessible.” For a beginner not much concerned with the quality of the image, there is the Samsung Gear 360 for about 90 bucksand many other models in between. Check out what’s available at B&H.

As for editing, Medium listed a variety of editing programsincluding the latest versions of Adobe After Effects and Final Cut Pro X. And there is a helpful beginning tutorial from Pinnacle to help editors understand the basics of the process.

This might be the first technology we use to try to get a Christian message into VR. Who’s going to try it?